What can you do with timers in Beam? Here are some examples:

These are just a few possibilities. State and timers together form a powerful programming paradigm for fine-grained control to express a huge variety of workflows. Stateful and timely processing in Beam is portable across data processing engines and integrated with Beam’s unified model of event time windowing in both streaming and batch processing.

What is stateful and timely processing?

In my prior post, I developed an understanding of stateful processing largely by contrast with associative, commutative combiners. In this post, I’ll emphasize a perspective that I had mentioned only briefly: that elementwise processing with access to per-key-and-window state and timers represents a fundamental pattern for “embarrassingly parallel” computation, distinct from the others in Beam.

In fact, stateful and timely computation is the low-level computational pattern that underlies the others. Precisely because it is lower level, it allows you to really micromanage your computations to unlock new use cases and new efficiencies. This incurs the complexity of manually managing your state and timers - it isn’t magic! Let’s first look again at the two primary computational patterns in Beam.

The most elementary embarrassingly parallel pattern is just using a bunch of computers to apply the same function to every input element of a massive collection. In Beam, per-element processing like this is expressed as a basic ParDo - analogous to “Map” from MapReduce - which is like an enhanced “map”, “flatMap”, etc, from functional programming.

The following diagram illustrates per-element processing. Input elements are squares, output elements are triangles. The colors of the elements represent their key, which will matter later. Each input element maps to the corresponding output element(s) completely independently. Processing may be distributed across computers in any way, yielding essentially limitless parallelism. 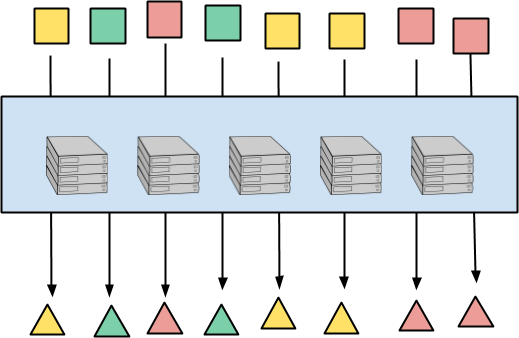 This pattern is obvious, exists in all data-parallel paradigms, and has a simple stateless implementation. Every input element can be processed independently or in arbitrary bundles. Balancing the work between computers is actually the hard part, and can be addressed by splitting, progress estimation, work-stealing, etc.

The other embarassingly parallel design pattern at the heart of Beam is per-key (and window) aggregation. Elements sharing a key are colocated and then combined using some associative and commutative operator. In Beam this is expressed as a GroupByKey or Combine.perKey, and corresponds to the shuffle and “Reduce” from MapReduce. It is sometimes helpful to think of per-key Combine as the fundamental operation, and raw GroupByKey as a combiner that just concatenates input elements. The communication pattern for the input elements is the same, modulo some optimizations possible for Combine.

In the illustration here, recall that the color of each element represents the key. So all of the red squares are routed to the same location where they are aggregated and the red triangle is the output. Likewise for the yellow and green squares, etc. In a real application, you may have millions of keys, so the parallelism is still massive. 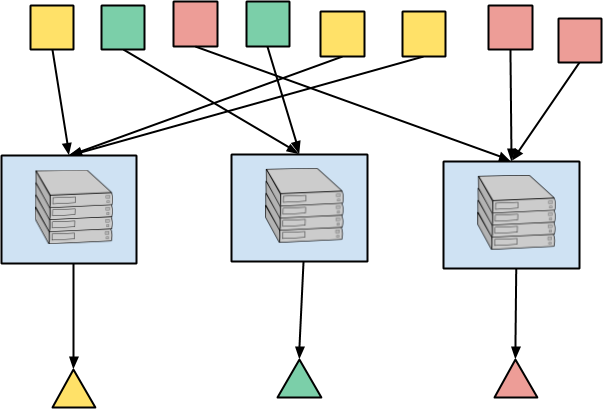 The underlying data processing engine will, at some level of abstraction, use state to perform this aggregation across all the elements arriving for a key. In particular, in a streaming execution, the aggregation process may need to wait for more data to arrive or for the watermark to estimate that all input for an event time window is complete. This requires some way to store the intermediate aggregation between input elements as well a way to a receive a callback when it is time to emit the result. As a result, the execution of per key aggregation by a stream processing engine fundamentally involves state and timers.

However, your code is just a declarative expression of the aggregation operator. The runner can choose a variety of ways to execute your operator. I went over this in detail in my prior post focused on state alone. Since you do not observe elements in any defined order, nor manipulate mutable state or timers directly, I call this neither stateful nor timely processing.

Both ParDo and Combine.perKey are standard patterns for parallelism that go back decades. When implementing these in a massive-scale distributed data processing engine, we can highlight a few characteristics that are particularly important.

Let us consider these characteristics of ParDo:

And these characteristics for Combine.perKey:

Combining some of the characteristics of unrestricted parallel mapping and per-key-and-window combination, we can discern a megaprimitive from which we build stateful and timely processing:

In the illustration below, the red squares are gathered and fed one by one to the stateful, timely, DoFn. As each element is processed, the DoFn has access to state (the color-partitioned cylinder on the right) and can set timers to receive callbacks (the colorful clocks on the left). 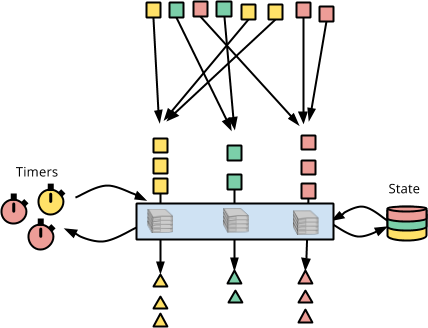 So that is the abstract notion of per-key-and-window stateful, timely processing in Apache Beam. Now let’s see what it looks like to write code that accesses state, sets timers, and receives callbacks.

To demonstrate stateful and timely processing, let’s work through a concrete example, with code.

Suppose you are writing a system to analyze events. You have a ton of data coming in and you need to enrich each event by RPC to an external system. You can’t just issue an RPC per event. Not only would this be terrible for performance, but it would also likely blow your quota with the external system. So you’d like to gather a number of events, make one RPC for them all, and then output all the enriched events.

Let’s set up the state we need to track batches of elements. As each element comes in, we will write the element to a buffer while tracking the number of elements we have buffered. Here are the state cells in code:

Walking through the code, we have:

Next, as a recap of reading and writing state, let’s write our @ProcessElement method. We will choose a limit on the size of the buffer, MAX_BUFFER_SIZE. If our buffer reaches this size, we will perform a single RPC to enrich all the events, and output.

Here is an illustration to accompany the code: 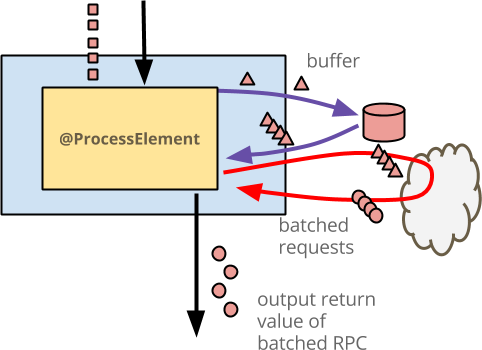 So far, we have only used state, but not timers. You may have noticed that there is a problem - there will usually be data left in the buffer. If no more input arrives, that data will never be processed. In Beam, every window has some point in event time when any further input for the window is considered too late and is discarded. At this point, we say that the window has “expired”. Since no further input can arrive to access the state for that window, the state is also discarded. For our example, we need to ensure that all leftover events are output when the window expires.

For our example, let us add an event time timer so that when the window expires, any events remaining in the buffer are processed.

Let’s unpack the pieces of this snippet:

Illustrating this logic, we have the diagram below: 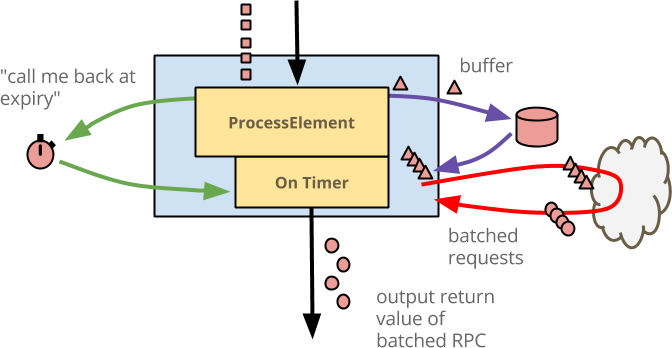 Now, if we are executing this in a streaming real-time manner, we might still have unbounded latency for particular buffered data. If the watermark is advancing very slowly, or event time windows are chosen to be quite large, then a lot of time might pass before output is emitted based either on enough elements or window expiration. We can also use timers to limit the amount of wall-clock time, aka processing time, before we process buffered elements. We can choose some reasonable amount of time so that even though we are issuing RPCs that are not as large as they might be, it is still few enough RPCs to avoid blowing our quota with the external service.

A timer in processing time (time as it passes while your pipeline is executing) is intuitively simple: you want to wait a certain amount of time and then receive a call back.

Here is an illustration of the final code: 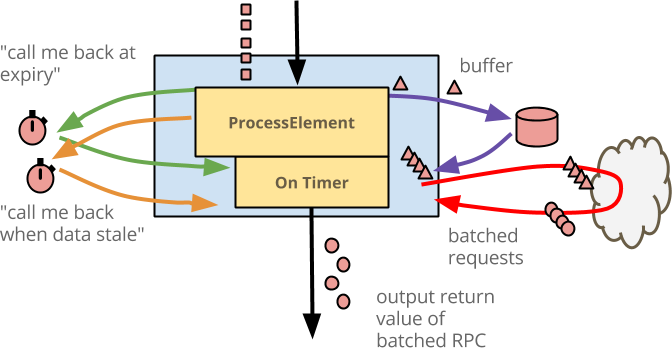 Recapping the entirety of the logic:

In the end, we have a full example that uses state and timers to explicitly manage the low-level details of a performance-sensitive transform in Beam. As we added more and more features, our DoFn actually became pretty large. That is a normal characteristic of stateful, timely processing. You are really digging in and managing a lot of details that are handled automatically when you express your logic using Beam’s higher-level APIs. What you gain from this extra effort is an ability to tackle use cases and achieve efficiencies that may not have been possible otherwise.

Beam’s unified model for event time across streaming and batch processing has novel implications for state and timers. Usually, you don’t need to do anything for your stateful and timely DoFn to work well in the Beam model. But it will help to be aware of the considerations below, especially if you have used similar features before outside of Beam.

One of the raisons d'être for Beam is correct processing of out-of-order event data, which is almost all event data. Beam’s solution to out-of-order data is event time windowing, where windows in event time yield correct results no matter what windowing a user chooses or what order the events come in. 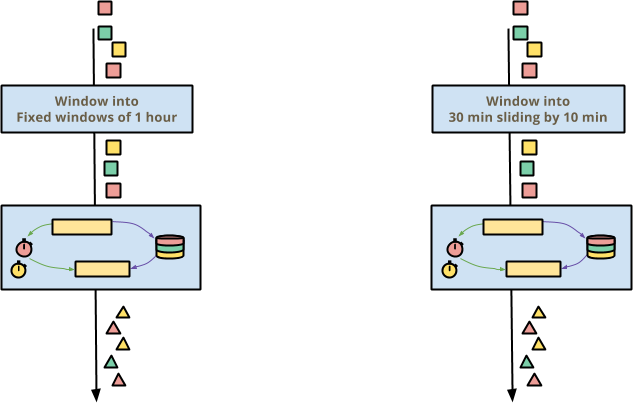 This works in Beam automatically, because state and timers are partitioned per key and window. Within each key and window, the stateful, timely processing is essentially independent. As an added benefit, the passing of event time (aka advancement of the watermark) allows automatic release of unreachable state when a window expires, so you often don’t have to worry about evicting old state.

A second tenet of Beam’s semantic model is that processing must be unified between batch and streaming. One important use case for this unification is the ability to apply the same logic to a stream of events in real time and to archived storage of the same events.

A common characteristic of archived data is that it may arrive radically out of order. The sharding of archived files often results in a totally different ordering for processing than events coming in near-real-time. The data will also all be all available and hence delivered instantaneously from the point of view of your pipeline. Whether running experiments on past data or reprocessing past results to fix a data processing bug, it is critically important that your processing logic be applicable to archived events just as easily as incoming near-real-time data. 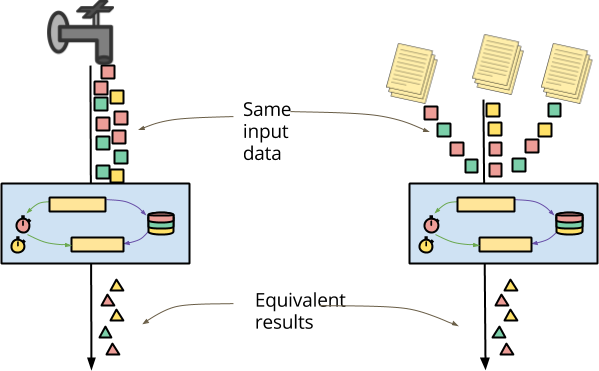 It is (deliberately) possible to write a stateful and timely DoFn that delivers results that depend on ordering or delivery timing, so in this sense there is additional burden on you, the DoFn author, to ensure that this nondeterminism falls within documented allowances.

I’ll end this post in the same way I ended the last. I hope you will go try out Beam with stateful, timely processing. If it opens up new possibilities for you, then great! If not, we want to hear about it. Since this is a new feature, please check the capability matrix to see the level of support for your preferred Beam backend(s).

Latest from the blog